German journalist tried to attack Chairman Kaczyński. He got an answer he did not expect. 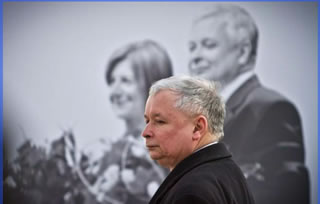 Jarosław Kaczyński gave an interview for Frankfurter Allgemeine Zeitung. The German interviewer attacked the Polish politician by strongly criticizing Poland’s decision not to accept refugees. He declared that it was “against the Christian values.” The Chairman of Law and Justice Party (PIS) responded: “There are about a billion people in the world, whose hard lives would improve dramatically if they came to Europe or America. However, their arrival would destroy what we should treasure the most: our civilization which is based on Christian values, the most human-friendly of all civilizations in the history of humanity.”

During the interview, Jarosław Kaczyński considered Angela Merkel’s victory in Bundestag as the most favorable outcome for Poland. “Mrs. Merkel would be the best choice from our country’s point of view, in particular considering her opponent, Mr. Schulz,” stated Kaczyński when speaking to Konrad Schuller, the FAZ correspondent in Warsaw.

Kaczyński thinks that Schulz, the former President of the European Parliament who represents the German Social Democratic Party, has a “soft spot for Russia.”

“People in high positions should exert self-control, whereas Mr. Schulz is known for his temper, bullying and shouting. He is a left-wing ideologist, whereas Mrs. Merkel’s statements have never been as anti-Polish as Mr. Schulz’s,” stated Kaczyński.

The Chairman of PiS considered the European Union a success until “it made two errors – the Treaty of Lisbon and the refugee crisis.”
“The European Union must reform itself in order to survive,” stated Kaczyński.

When explaining the Polish stance on refugees, condemned by his interviewer as against the Christian values, Kaczyński pointed out the Christian rule “ordo caritatis,” which recommends looking after “one’s own family, community and nation,” before anything else.

“We also need to be realistic. There are around a billion people in the world, whose hard lives would improve dramatically if they came to Europe or America. However, their arrival would destroy what we should treasure most: our civilization, based on Christian values, the most human-friendly of all in the history of humanity,” said PiS Chairman.

Jarosław Kaczyński supports changes to the European treaties. “Nations need to be stronger, while the competencies of the E.U. need to be limited. We also need to defend against monocentrism, which only benefits Germany, rather than other states,” he said.

Asked to assess Donald Trump’s first actions as president, Kaczyński admitted some of Trump’s statements are still “unclear.” He added that the good thing about Donald Trump is that he “does not intend to meddle into other countries’ affairs.”