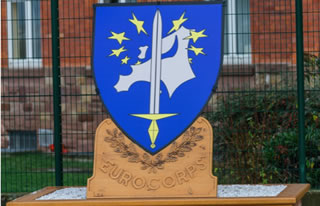 “Eurocorps is a political symbol, rather than an elite military unit,” says Deputy Defense Minister, Tomasz Szatkowski, in his interview with wpolityce.pl.

wPolityce.pl: In recent days, all public debates alarm that Poland is about to leave the Eurocorps. There has been a lot of disinformation on this subject. What is the truth?

Tomasz Szatkowski, Deputy Minister of Defense: Let's be clear about that - Poland is not leaving Eurocorps, even though several other states such as Finland or Austria indeed left recently. We remain an associated nation. What we are not pursuing, at least for a foreseeable future, is a framework status. The primary reason for this decision is the concern that the framework nations clearly restrict the mandate of Eurocorps' command, reducing its potential.

What does it mean?

For the last several years, the command of Eurocorps has been in a preparation stage for a variety of operations and missions, including stabilizing, advisory and training, as well as the most ambitious and crucial one from our point of view - commanding a high intensity corps operation within the NATO military process. However, at the moment, the framework nations, mainly France and Germany, have decided to reduce the headquarters of this command, as well as limit its missions to the less demanding ones, supporting stability in crises zones, mainly in Africa. The media incorrectly describe Eurocorps as a sort of military protection for the EU, consisting of 60 to 70 thousand soldiers. In fact, Eurocorps is one of many operative commands in Europe. Many similar structures, e.g. Polish Center for Land Operations in Kraków, serve as a back room for commanding missions of the European Union.

I understand that it might be a rather dead structure, and that the additional issue is the restriction of ambitions by the framework nations, but was it not worth to retain the maximum engagement in the Eurocorps regardless the knowledge that benefits are not as rewarding ad they could be?

First of all, Poland is staying within Eurocorps, we are not withdrawing like some other states did. As an associated nation, our contribution will be higher than that of the larger and more affluent Italy, even following the termination of gradual reduction after 2020. Second of all, the aim and scope should be measured according to interests and resources. Our personnel and financial resources have been recklessly wasted. Back in the days when Siemoniak was Defense Minister, the Ministry of Defence (MON) Department of International Security Policy warned that our contribution to Eurocorps was too generous in proportion to our interests and negotiated benefits, such as the number of commanding posts, or influence over the corps’ operations, which never took place in Poland, despite the efforts of the Polish General Staff. My understanding is that the motivation to remain deeply engaged was merely image and prestige, the desire to be viewed as a promoter of the European integration. This delusive success came at a cost of a break of the country's command structure, e.g. Center for Land Operations (COL). Similarly, when COL, which is a significant link in our chain of command, carried out important missions, or organized training, it had to use divisions’ command. Divisions themselves became disassembled, having been deprived of support and reduced in numbers. Back then, reserve generals, so active in the media today, did not speak up. Disproportion of our contribution and our benefits deepened even more when the framework nations of Eurocorps decided to reduce its size, and the number of its operations. In the current climate and the new duty to defend the Eastern flank, we can't afford to keep several hundred of our staff with equipment in Strasburg, when they are used for a limited number of missions, which are not even primary from our point of view. We can utilize the resources much more effectively in our country.

We hear about Elbląg, where a multinational division command is formed.

Some of the staff will be deployed to Elbląg, but we also have other needs. In Szczecin, we are developing the Multinational Corps Northeast with Germany and Denmark, which is crucial for the Eastern flank. We have the Center for Land Operations in Kraków, which has duties within NATO, as well as the duty to defend our country. Importantly for Eurocorps, we want to make COL the operative command for duty of the EU military group. It is better and more effective for us to do it in Kraków, where the staff can be deployed to various tasks, and not only to advisory and training missions in exotic countries. In Kraków, the military staff will be utilized more effectively and less expensively. Therefore, we are not withdrawing from the military part of the EU, but we do want to support the command divisions that suffered cuts several years ago.

The opposition's objections are not only of military, but also political nature. Is the decision likely to be interpreted as an insult to Paris and Berlin?

There is a risk of that, yes. However, before the decision to restrict the role and capabilities of Eurocorps was made, we did our best to dissuade our partners from it, and we warned them that going ahead with it would have to cause a reduction of our contribution. After the decision was approved, I have personally written to my counterparts in the framework nations, explaining how it would affect our contribution. The letters were sent out around three months ago, so there is nothing sudden about our move. What is more, I've been privy to information that European military circles have no intention to develop Eurocorps at this present time. Frankly, even in France, where Eurocorps are based, is more focused on its own, national command of corps in Lille. I have also assured our partners that our withdrawal does not mean any less engagement in the European policies we share, and we make it evident by our willingness to form commands in Poland. Above that, we are also ready to coordinate our process of reduction in a manner as easy for others as possible.

Eurocorps is a political symbol, rather than an elite military unit. A model example of such a unit would be the British ARRC. As I mentioned before, France is developing its corps in Lille, whereas Spain has their own in Valencia, where we are soon to send several of our own officers. Germany has their corps in Ulm, and let's not forget about the Polish-German-Danish corps in Szczecin, which we support most by increased contributions and development. The framework nations' decision is a chance for all those units around Europe to become significantly more capable than the command in Strasburg.

Therefore, is no threat that Germany or France, in an act of revenge, would in the future restrict their activity within NATO training in Poland, or other Baltic states?

We’ve not been given such impression. I am meeting my German counterpart in Berlin, and we are planning to discuss, among others, our cooperation in forming a sea command at the Baltic, a division in Elbląg, obviously the corps in Szczecin, but also the cooperation between territorial military units. We have things under control.

Apart from communication, since this completely understandable decision is now being used by the opposition against you simply because you have not communicated it well.

I totally accept your comment, we should have explained our decision in advance.