Does the Chief Judge of Poland's Constitutional Tribunal protect the murderers of the Blessed Father Jerzy Popiełuszko? 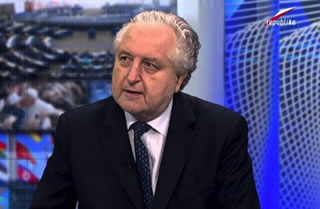 Journalist Mirosłw Kokoszkiewicz retrieved records of a very important public speech made by former MP, Zygmunt Wrzodak during the IV Term, 107 Session, of the Polish Parliament (Sejm). When speaking in the Parliament in 2005, Wrzodak asked a question about Prof. Andrzej Rzepliński, who currently serves as the Chief Judge of the Polish Constitutional Tribunal, the organ which is at the heart of the current constitutional crisis.

In his speech Wrzodak claimed that the Ministry of Justice was in the possession of a statement by Colonel Pietruszka regarding individuals who ordered the killing of Blessed Jerzy Popiełuszko and intended to murder Archbishop Gulbinowicz. The statement was allegedly made in the presence of Prof. Rzepliński.

Considering the role of Prof. Rzepliński in initiating the current constitutional crisis, such information is an important indicator of his character. Zygmunt Wrzodak claimed that Prof. Rzepliński was a member of PZPR (the Communist Polish United Workers’ Party) and asked the Chairman of the Constitutional Tribunal about his past connections with this communist organization, but received no response.

Now an appeal is made to the Minister of Justice Zbigniew Ziobro to disclose this document located in his Ministry. The straightforward question is: Has Prof. Rzepliński been protecting murderers for the last few years?

Also, I would like to know how the MPs proposing Prof. Rzepliński’s appointment view his statement from 2001, in which he expressed his resentment towards 1944-1950 communist authorities for convicting only 10 Poles after the Jedwabne pogrom, when in his mind at least 100 should have been punished. On what kind of information, history, or whose biography Prof. Rzepliński relies expressing such a bizarre opinion?

I would also like to mention the most important matter. Early in 1990, Colonel Pietruszka, who at the time worked for the SB (Pol. abbr. Sluzba Bezpieczenstwa - Polish communist secret police), asked to make a confession to the National Prosecutor. His statement was appropriately documented in the presence of Prof. Rzepliński and late Mr. Nowicki. Colonel Pietruszka described in detail how the murder of Blessed Jerzy Popiełuszka occurred. Colonel Pietruszka revealed who from the MSW (Ministerstwo Spraw Wewnetrznych - Ministry of Interior) ordered the murder and who actually murdered Piotr Bartoszcze. Pietruszka’s interview was conducted in the presence of Prof. Rzepliński. What did Professor Rzeplinski do with this knowledge?

I think Prof. Rzepliński has this knowledge, as his signature is visible under the SB colonel Pietruszka statement and this statement is located in the Ministry of Justice. I was able to access it this year. I view this information as truly shocking, considering that Colonel Pietruszka clearly pointed out who ordered and who murdered Piotr Bartoszcze, as well as revealed murderous schemes planned back in 1980s, intending to kill many individuals, such as Archbishop Gulbinowicz. I need to emphasize that colonel’s statement was made in the presence of Prof. Rzepliński and Prof. Rzepliński signed it.

What did Prof. Rzepliński do with his knowledge since 1990? Thank you.