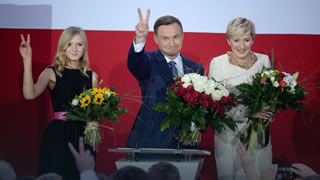 Andrzej Duda won the second round of the 2015 Polish presidential election in the U.S. The President-Elect received decisively more votes than Bronisław Komorowski across all four Polish Consular Districts in the U.S.

The data released by the Polish consulates in the U.S. reveals that Andrzej Duda received 18,583 votes, whereas Komorowski managed to garner support from only 4,392 voters. Out of 22 poling districts, Komorowski found support only in the districts of Washington and San Francisco.

The number of votes cast during the first round of elections, also won by the Law and Justice (Prawo i Sprawiedliwosc, abbr. PiS) candidate, was 19,000, whereas the valid votes in the second round totaled 22,975.

Nearly 29,400 Polish-Americans across the U.S. registered to vote in the second round of the 2015 Polish presidential elections; in comparison to 22,070, who voted during the first round. By comparison, during the 2010 presidential elections, five years ago, the total number of votes cast was 37,000, and here again, Jaroslaw Kaczynski, of PiS, received the majority of votes, as well.

The Polish presidential election took place in the U.S. on Saturday, May 24, in 4 Polish Consulates in Chicago, New York, Washington and Los Angeles, with 22 polling stations spread across those districts.

The PiS candidate, Andrzej Duda, won decisively in the consular district of the Consulate General of Poland in Chicago, covering 13 US states. Out of 12,382 valid votes cast across 6 polling stations in Chicago, Andrzej Duda received 11,211 votes, whereas the incumbent President Bronisław Komorowski, received only 1,171 votes.

Andrzej Duda also won in the consular district of the Polish Consulate in New York, which covers 11 U.S. states. Here, 6,027 votes were cast for Duda, compared to 2,155 votes for Komorowski. The PiS’s candidate won at all 7 polling stations, 4 of which were in New York. Others were in Passaic, New Jersey, New Britain, Connecticut, and Philadelphia, PA.

“The voting process was efficient and peaceful. There were few incidents on the street outside the polling station, but that was beyond our control, as the Polish law on ‘Campaign Silence’ cannot be enforced in the United States. Obviously, such incidents were noted in the polling stations’ protocols,” said Consul Mateusz Stąsiek.

The Consulate General in New York, responsible for overseeing 7 polling stations, reported 8,182 valid votes cast. Here, 7,963 votes were cast during the first round, and 10,826 during the second round.

In the Los Angeles consular district, which covers 15 states of the Western United States, Andrzej Duda won 901 votes and Bronisław Komorowski 704. Komorowski managed to win only in one of the seven polling stations in San Francisco. Mariusz Brymora, Consul General in Los Angeles noted similar outcome during the first round.

The Los Angeles consulate received 1,605 valid votes, from among 2,262 registered voters. By comparison, during the first round, there were 1,682 individuals eligible to vote.

- This is nothing new, and it is always the case. It was like this during the first round, and in all previous elections. In spite of registering earlier, many registered voters chose not to participate.

From among those registered to vote, only 72.5 cast their votes - Said the consul Brymora. He estimated that the most popular form of voting was via electronic registration on the website eWybory. But, many people also registered by phone - he added.
Andrzej Duda also won in Washington, with 444 votes, compared with Komorowski’s 362 votes. The incumbent president won by a few votes at the polling station in the Embassy of the Republic of Poland in Washington. The other polling place was located in Pompano Beach, Florida.

Piotr Konowrocki, the Consul General in Washington, informed that the majority of the Florida-based voters chose to vote by mail. “I suspect that out of the total 414 ballot forms posted, most were returned by the voters who live in Florida,” he said. Polling stations’ data in Washington showed that 247 out of the 272 mailed ballots were valid. “In my view, the period between the first and the second round of the election may have not been long enough for all voters to receive ballot forms on time,” said Consul Konowrocki.