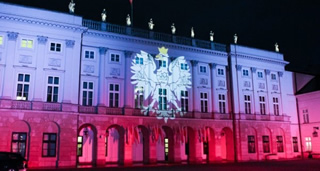 After the defeat of Poland in the fall of 1939, the political work of the Communist Party all over the world was directed toward halting all armed efforts and disseminating defeatism in the Allied camp. Eventually, the Allied realized that it became necessary to put an end to this misuse of civic freedoms, and the arrest of Maurice Thorez in France, suspension of the Daily Worker in Great Britain, the arrest of Earl Browder in the United States, followed.

Their activities had been inspired by Moscow's V. M. Molotov, then Prime Minister and Foreign Commissar of the Soviet Government, who in the message delivered to the 5th Extraordinary Session of the Supreme Soviet of the U.S.S.R. in Moscow on October 31, 1939 had this to say about the Allies' war against Nazi Germany.

Today, as far as the European great powers are concerned, Germany is in a position of a State that is striving for the earliest termination of the war and for peace, while Britain and France, which but yesterday were declaiming against aggression, are in favor of continuing the war and are opposed to the conclusion of peace... The ruling circles of Britain and France have been lately attempting to depict themselves as champions of the dramatic rights of nations against Hitlerism, and the British government has announced that its aim in the war with Germany is nothing more or less than "the destruction of Hitlerism". It amounts to this, that the British, and with them the French supporters of the war, have declared something in the nature of "ideological" war on Germany, reminiscent of the religious wars of olden times.

The real cause of the Anglo-French war with Germany was not that Britain and France had vowed to restore old Poland and not, of course, that they decided to undertake a fight for democracy. The ruling circles of Britain and France have, of course, other more actual motives for going to war with Germany. These motives do not lie in any ideology but in their profoundly material interests as mighty colonial powers.... Thus the imperialist character of this war is obvious to anyone who wants to face realities and does not close his eyes to facts.

Our relations with Germany have radically improved. Here development has proceeded along the line of strengthening our friendly relations, extending our practical cooperation and rendering Germany political support in her effort for peace.

At that time, Wanda Wasilewska served as the Soviet plenipotentiary in Poland. Her tactics naturally followed Molotov's policy. Hence, the Polish communist group did not organize any resistance against the German invader; nor did it make any attempt to free its country from foreign occupation. Instead, all their efforts were concentrated on sowing distrust among Western democracies at war with the Germans.

In view of this complexity, the Polish Communists chose to attack the policies of the Polish pre-war government and the Polish state, thus satisfying the pro-German aspect and creating a small niche for themselves by attracting those who politically opposed the defeated Polish government.

Therefore, the brunt of the propaganda activities of the scant but noisy communist group, enjoying the support of the Soviet authorities, was turned against Poland's pre-war government and the pre-war Polish State, with the hope of converting the bundists (Jewish labor party) and socialist democrats to their point of view. However, the real target of this criticism was the Polish Exile Government in London.

It was at that time that Wanda Wasilewska relinquished her Polish citizenship and received a Soviet passport. She was appointed member of the Supreme Soviet of the U.S.S.R., and her political bonds were tightened by her marriage to Alexander Korneychuk, Deputy Commissar for Foreign Affairs of the Soviet Union, a successful play writer.