Keeping WWII stolen art is like being a Nazi!
Book Review 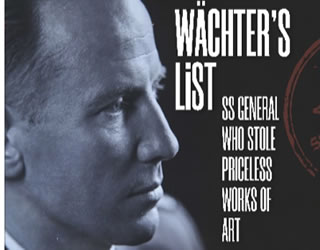 World War II brought unbearable misery and suffering to Poland and Poles. Poland lost 11,071,000 people of its 38 million nation, as well as 30% of its land, after being betrayed by her allies and neighbors. The material losses cannot be compared to anything known before. Two great powers, Germany and Russia had, in a coordinated effort, attacked Poland. Their armies killed millions of people, looted, stole, confiscated anything of value. Some absolutely priceless artifacts disappeared forever.

Is there anything new that we can we learn from the new publication of Dr. Magdalena Ogórek, a seasoned scholar, and historian of art?

At first, I was puzzled by the title, “Wächter’s List” – similar to “Schindler’s List” - and by the photograph of the SS major general. I am currently preparing a major study on the heinous acts of the Waffen SS divisions, and did not recognize this face. Later Dr. Ogórek told me, how General Wächter was instrumental in creating the infamous butchers of Warsaw, 14th SS Galizien division, commanded by Bronisław Kamiński. He was also influential in creating Vlasov’s Russian Liberation Army. Both units fought on German side during WWII.

The book is a compelling study. Originally written in Polish, it was translated by Stan Kaye, and is written as a reportage, dated day-after- day meticulously by the author from the beginning of her investigative process. In her book Dr. Ogórek plays the role of an arbiter elegantiarum, as Nobel Prize winner, Henryk Sienkiewicz would have called her. She takes us through her three year investigation, through the marvels of places, like Prague (Czech Republic), Vienna (Austria), Rome and the Vatican (Italy), and Munich, or rather Hohenshwangau Castle in Germany.

The book has lovely descriptions of immortal art, architecture, and Huxleyan in-depth psychological analysis on the generations post-Nazi psyche. She describes the historical perspectives of both ordinary people, like restaurant owners and patrons, as well as the extraordinary thinkers and politicians during WW2. It is clear in the book that her charisma, and well-rounded countenance opened all the doors to further investigate Wachter’s activities and legacy. She obtains access to celebrities and ordinary people, as well as to intellectuals and archives hidden to the public. She even manages to search many of the legendarily secret Vatican State Archives, with the explicit support of the archive executives to cruise through untouched resources.

Wächter’s List is read like a wonderful criminal or suspense story. In a Tom Clancy style narrative, Dr. Ogórek is able to show her personal judgments on people and their actions.

Dr. Magdalena Ogórek is an excellent historian, who pays attention to detail, and poses relevant questions, guiding the reader toward logical conclusions to her findings.

In her hunt for the truth on artwork of national importance, Dr. Ogórek adds her personal touch, by revealing the evolution of her judgments. She is truthful, honest and open for other solutions. Throughout her pursuit, she remains empathetic to others, their judgments and motivations, even when the truth is ugly.

Dr. Ogórek’s account through the enchanted world of artists, painters, writers, poets, as well as her personal relationship to their art, demonstrates to the reader, her admiration for these specimens of Polish heritage, and their fate. She tells us how she receives the world presented by Józef Brandt, or Egon Schiele, Edvard Munch, or Fałat. Brilliantly she presents people that influenced or touched the world of art, like Austrian empress Elisabeth, by Viennese nicknamed Sissi, Bavarian king Ludwig II, or Viennese social butterfly Adele Bloch-Bauer, or … Adolf Hitler.

Dr. Ogórek’s in-depth historical knowledge brings the reader to a deep and complete background from an historic, as well as a human picture. In her searches, she follows the life of Charlotte and Otto Baron von Wächter.

This SS general was the governor of Krakau District, and deputy to Hans Frank, the governor general of Generalgouvernemant (GG). Per his orders, the Krakau Jewish ghetto was established, where most of the Jewish inhabitants perished. Indeed, Dr. Ogórek says: the ghetto was “liquidated” when Wächter was transferred to Lwów, however, he still bears the responsibility for many atrocities.

Dr. Ogórek is objective in her explanations and judgments, and interestingly leaves room for the reader to come to his/her own conclusions. She does not accuse the son of Otto Wächter, Horst, responsible for his father’s actions. However, she attempts to influence him to act justly, and evaluates only his actions.
Through her vigorous pursuit, some artifacts stollen by the Wächters during the war were returned to Poland, but at the same time, she emphasizes the need to identify and find other pieces of . One may find such a stance pathetic, but through her polite and gentle influence Baron Horst von Wächter, upon returning the art, issued a statement appealing to the children of other SS-men to follow his suit, and return stollen valuables to Poland, and the rightful owners.

Dr. Ogórek condemns Austria and Germany, and other countries for harboring stolen goods and protecting looters. She painstakingly discloses how criminal acquisitions are protected by those countries, and the shallowness of the de-nazification process. With great compassion she shows, how the successors of the genocide victims are being humiliated again. The proof of the ownership lays on the victims responsibility. In her subliminal message, she accuses those countries for not proving their rightful and legal ownership of the artifacts. The Cold War of the 1950s is over. Now it is high time to search for stollen goods. Rightful ownership must be restored, says Dr. Ogórek. Murdered, exterminated, and deprived of ownership, the victims must be restored to their impeccable rights. These must be done, wether they were Jewish, Catholic, Protestant, Polish, or Czech, or Austrian. Should the masterpieces of Rafael Santi, Leonardo da Vinci, Rembrandt, Breughel, or Kossak be hanging on the walls of mansions in Beverly Hills, Toronto, England, or Germany, or remain hidden in the archives of Viennese museums? They must be returned to the rightful owners, or descendants of the victims of WWII, which were deprived of any rights to keep that, which generations managed to acquire. Keeping WWII stolen art is like being a Nazi!

Summarizing, the book is very well written, well-structured, and may be read like a Tom Clancy suspense novel. Well recommended!