What is really happening in Poland today? 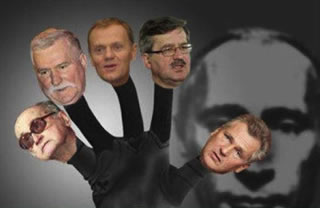 Since the “June 1989 Round-table Negotiations” between the communist government and the leaders of the Solidarity Movement, Poland has been tightly controlled and governed by a shadowy power holding group. It consists of former communist military intelligence officers, their Russian “handlers," communist prosecutors, and communist judges. Other types of Special Services and some political parties have become the front-end tools of this shadowy center of power.

As the pro-Moscow general Kiszczak (who organized and orchestrated the workers’ massacres) stated - and we paraphrase here: "the Polish communists were not that stupid to give up the power willingly, and have their throats cut by the Solidarity activists". The communist regime had to protect its leaders against accountability for the communist crimes they committed. They effectively co-opted the willing and destroyed the unwilling leaders of the Solidarity Movement. Ultimately, they managed to preserve their power after June 1989, by building the new center of Power in Poland - of course, behind the scenes. This well connected powerful mafia-like group, managed to get hold of all the key resources of the country, and to transform the justice system, and the media, into an effective tool protecting their own hold on power.


The power-holding players connected to Moscow have built an extensive network of people who were given an opportunity to earn really big money. As a result, these stakeholders have a lot to defend today. The Godfathers from the power group were very generous in financing various journalists, the heads of the newspapers, and internet portals. While building this network, they resorted to the simplest, well-tested, oldest, and most effective method - corruption. Anyone who has taken a lot of money at least once, is no longer able to withdraw from the corruptive system.

The network is controlled by the throat. Anyone who wants to blow the whistle about the crimes of this mafia faces the threat of “suicide”. Everyone in the network is spied on, while their sins and transgressions are collected in accordance with the old good practices of the Stalinist Poland. This is also why the wiretap scandals constantly rock the boat in Poland.

This power-holding group consists of two divisions: Operators and Propagandists. The first devises an action plan, while the second implements it and manipulates the public opinion. The first group controls everybody, the second controls primarily the media.  The key opposition leaders who are intimately familiar with this holding mafia (like Ziobro, Kaczynski and Macierewicz), have been portrayed by the propaganda group as the greatest enemies of the public. While the Civic Platform was about to prosecute them, it decided not to, out of fear that too much confidential information about their modus operendi would be exposed. Similar plans were pursued with respect to the CBA (Anti-Corruption Bureau) chief Mariusz Kaminski, but President Andrzej Duda’s through his swift pardon frustrated their plans.

It is being said that before the parliamentary elections, the government of Prime Minister Kopacz was ordered to have meetings of her Cabinet outside of Warsaw - in order to install wiretaps in the Prime Minister’s offices. According to some leaks in the media, the wiretaps are everywhere - on the shelves and desks, in the walls, in the ceilings, and in each one of the government departments (over 80 were installed altogether). The cell phones and e-mails of journalists, the PIS (Prawo i Sprawiedliwosc - Law and Justice), the Kukiz Party members of the parliament, and government officials, were bugged. It is being said that all the rooms in the Presidential Palace are bugged as well. Do you remember the uproar when President Duda went, at night, to see PiS Chairman Jaroslaw Kaczynski? Do you know why? Because the apartment of Chairman Jaroslaw Kaczynski is not bugged, and they could not be surreptitiously recorded there.

In order to provoke the social unrest, and to incite fear and confusion that the nation is against the new PIS government, a new initiative called KOD (Committee for Defense of Democracy) was born. A disinformation operation cocooned to build an impression that the PIS leads to chaos, civil unrest, and threatens to cause a war with Russia, Germany and the EU, is in full swing. The disinformation and psychological warfare is also being conducted on the internet and in the media. Paid agents are to undermine the alliance with the USA and NATO, and to ridicule the Visegrad Group. They are to amplify, emphasize, and promote the message that PIS means “fascism”, “totalitarianism”, and “backward Catholicism”; this being even worse than the Islam, and the Middle Ages, and an obvious shame for the whole Europe.

The trainees of this propaganda warfare have received a set of keywords to use in their internet postings, broadcasts, interviews and reports. They are also given a set of nicknames such as a Polish a patriot, concerned Polish citizen, an observer, who is attentive, concerned, scared, and the like.

Considering all the above, the PIS should immediately revise the electoral laws in order to eliminate an ever-present, and unheard of, high percentage of invalid votes, assuring better control over the ballots, and empowering the grass-root initiatives to oversee the electoral process. The Government of Prime Minister Szydlo must restore the public mission in the state-owned media, while the parliamentary majority shall make every effort to restore the credibility of the Constitutional Tribunal. Chairman Rzeplinski who actively participated in revisions of the law governing the Constitutional Tribunal that were subsequently held as unconstitutional, and who openly argued on behalf of the Civic Platform, should be forced to step down immediately.

The corrupt power holding group will not give up, and will stop at nothing, including the assassinations. Because there is too much wealth at stake, they will resort to provocations, and acts of terror, staged most likely by the mentally unstable individuals. They are ready to call for street riots, and to stage provocations that may lead to the loss of limb, life, and property.