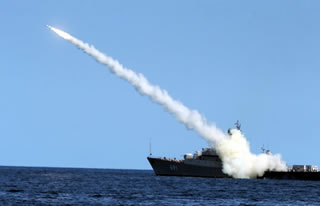 The Russian Defense Minister, Sergei Shoygu issued a statement about the completion of a series of attacks on Islamist targets, utilizing missiles fired from military vessels. This has caught some commentators by surprise, seeing as how the missile attacks were conducted by a small fleet located in the Caspian Sea. According to the majority of sources, the fleet should not have targeting abilities of 1500 km and more.

The Russian news agency TASS has reported that four missile frigates fired a total of 26 “winged missiles” on 11 separate targets. According to the Russian military, all targets were to have been completely destroyed without any civilian casualties noted. The attack was undertaken after a series of intelligence gatherings operations and intense reconnaissance missions which allowed the military to identify locations used by the so-called Islamic State.

What are the missiles used by the Russians ?

President Putin has stated that the last  attack by "winged missiles” occurred on targets at a distance of 1500 km (932 nautical miles) away from the military vessels. Immediately the question came up as to what missile system had been used ?  Most sources indicated that no naval vessel being part of the Caspian Flotilla possesses weaponry with such a range, nor systems capability of pinpointing such targeted objectives.

Gepards are equipped with either X-35 ship destroying missiles (referred to by the Russians as "winged missiles”) with a range of up to 260 km (the "Tatarstan"), or with a "Kalibr-NK" missile system with missiles having a range (according to most sources) of 300 km (the naval vessel "Dagestan ").

So one can assume that a "Kalibr-NK" missile system was used, which was incidentally, announced by the Ministry of Defense. This would mean, however, that this system might use missiles, which are not expected to have been used thus far on such small-sized military vessels. The case is so disturbing, as the "Kalibr-NK" system is also used by the Black Sea Fleet. What's even more disturbing is the frequency with which one can fire missiles from Russian launchers (five missiles within 20 seconds).

Rear-Admiral Sergei Alekminsky, the Commander of the Caspian Flotilla in 2012, said that the “Kalibr-NK” system features missiles with a range of 375 km with respect to sea targets and 2600 km with respect to land-based targets. In 2013, Moscow Defense Brief reported that “Kalibr-NK” has a range of ground-based destruction even up to 2600 km. All of this makes use of the mentioned system even more likely.

A Russian Defense Ministry video release presents a combination of images from various units, as evidenced by photos featuring a 76 mm caliber  AK 176  naval gun, which is not to be found on “Bujan-M” type military vessels (equipped with A-190, 100 mm caliber guns). They are, however, to be found on Gepard corvettes and artillery units.

The missiles had to fly over the territory of Iran and Iraq, meaning that Russia has established a very close military cooperation with the authorities in Tehran.

"Human shields" are an obstacle, but not an impenetrable wall

The Russians are turning their attention to the increasingly frequent use of “ human cover” of civilian buildings, hospitals and mosques by Islamists. They stress, however, that the use of civilians as "human shields" complicates the execution of military assignments, but this fact shall not interrupt these efforts.