The World Must not Forget Polish Victims of Nazi Germany 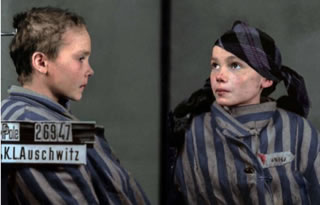 Yet another anniversary of the liberation of Auschwitz. Browsing the network at night, I came across this picture and I cannot stop thinking about it.

This photo shows the 14-year-old Czesława Kwoka, who was sent to Auschwitz at the end of 1942. She was one of 10,000 Polish children from Zamojszczyzna murdered by the Nazis Germany as part of Aktion Zamość conducted between 1942 and 1943 in Poland. She was 14 years old when as a result of the selection process made on the inhabitants of the Zamość region, she along with her mother, Catherine, was destined to die in the German concentration camp in Auschwitz. They were transferred to Auschwitz on December 13, 1942, where they were given the numbers 26946 and 26947. Germans killed Czeslawa by an injection of phenol to the heart on February 18, 1943.

This photo is digitally colorized, which adds to its power. The photographer forced by the Germans to take thousands of pictures of prisoners described this photograph as follows:

"She was so very young and so terrified. The girl did not understand why she is here and what is being said to her. So this German woman, Kapo, took a stick and hit her in the face. She landed her anger on the girl. Such a pretty girl, so innocent. She was crying, but there was nothing she could do.

Before taking a picture, she wiped her tears and blood from the cut on her lip. Frankly, I felt as if I got this blow, but I couldn’t do anything. They would kill me. We could not even open our mouth."

Czeslawa was murdered in Auschwitz, surviving her mother just by one month.

The following quote is from the official press release of the album "Do not forget them. The youngest victims of Auschwitz "(ed. Auschwitz-Birkenau State Museum):

American poet Theresa Senato Edwards and painter Lori Schreiner published an album-book dedicated to the child victims of the Holocaust. The poem "Painting of Czeslawa Kwoka" and several paintings based on photographs of Czeslawa Kwoka from Auschwitz, are part of this book.

This year marks the 75 anniversary of the Operation Zamojszyzna. The Holy Trinity Parish in Windsor, Ontario, will commemorate this occasion with opening of the IPN Exhibition "Sonderlaboratorium SS – Zamojszczyzna." One of the documents of the exhibition is dedicated to Czeslawa Kwoka. The document has been developed by Richard Kusmierczyk together with Theresa Senato Edwards and Lori Schreiner. A copy of this leaflet is presented below.