Poles murdered for helping Jews are the most ill-treated group 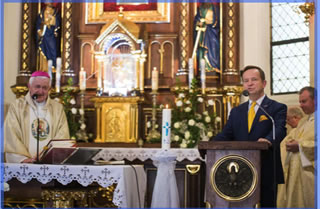 Poles killed by Germans for helping Jews in WWII are the most harmed group. They are not counted either as the Righteous or as the victims of the Holocaust, says prof. Magdalena Gawin, Deputy Minister of the Polish Ministry of Culture and National Heritage.

We just commemorated a family of three members of the Lubkiewicz family from Sadowne, Antoni Prusiński and Piotr Leszczyński from the village of Poręba-Kocęby. Now the Pilecki Institute will commemorate Aleksandra and Hieronim Skłodowski from the village of Skłody-Piotrowice. Next there will be Stoczek Węgrowski and Ostrów Mazowiecka. People from these villages were murdered for helping Jews.

Where did the idea of commemorating them come from?

A few years ago, a debate about the Monument to the Righteous in Warsaw was held in Poland. The idea was ultimately blocked. I will not cite all the arguments of the opponents of this monument because we all know them well. For example, that the Poles should not be too proud and should not drink from other people's successes, after all only the minority was helping the Jews. Paying homage to the people who risked their own lives and the lives of their entire families became unimportant. But these people represented what I call the center of civil resistance. In my opinion, they should be commemorated. But the discussion gained momentum and I heard a lot of other opinions.

What kind of opinions?

For example, that the Germans killed the Poles for hiding the Jews extremely rarely.

On what basis such opinions are formulated?

Based on nothing. No one in Poland had full access to testimonies before the Main Commission for the Investigation of Hitler’s Crimes. When I was doing my own historical research, I was sitting in the IPN prosecutor's room and I was going through the piles of file folders with testimonies, completely untouched or very little known research material. Before I came to the Ministry of Culture, I read hundreds of such testimonies. Maybe even more. In the meantime, Dr. Edward Kopówka and priest Paweł Rytel-Andrianik published a book entitled "I will give them a name forever." From that book I learned about the Lubkiewicz family from Sadowna. I got in the car and went there. Then I traveled to them every weekend. One hundred kilometers one way and back. And did so for two years.

What was the conclusion of it?

Around the Treblinka Concentration Camp, the Polish people were murdered not only for hiding the Jews, but for every form of help given to the Jews. Please, check the distances between villages and towns, where the Pilecki Institute is now conducting the program of commemoration.

Did you interview many families?

Many. I was interested in the entire context of the occupation. I tried to identify the greatest murderer of Poles and Jews in the Ostrów-Wyszków county who was responsible for mass terror. However, meetings with the families of the murdered Poles opened up a new perspective for me.

They are warm, nice, hospitable, but they felt loneliness. The Pilecki Institute has already made interviews with children, witnesses of their parents’ murders. These testimonies are terrifying.

So these were the interviews with the children of the Righteous?

Most of the victims did not receive the status of the Righteous. The exception is the Lubkiewicz family. Their case came out in Jewish testimonies shortly after the war, then it was the subject of Polish investigations. In 1969, the Jewish Historical Institute received a letter from an eyewitness, Irena Kamińska née Lubkiewicz, who watched the many hours of torment of her brother and her parents. She became an orphan, she had no money for education, she had to get a job as a young child. That event has left its mark on her entire life. The family received a medal, but only in 1997, almost 30 years after the letter was received by the JHI, 54 years from those events. At that time, Mrs. Irena was no longer alive.

Why is this happening?

Israel does not recognize Polish documentation produced by the Main Commission for the Investigation of Hitler’s Crimes. A Jewish eyewitness must be present, and in the case of murdered Poles it is very rare. Let's be clear: Poles who died for helping Jews are the most harmed group. They are the greatest victims because they are not counted either as the Righteous or as the victims of the Holocaust. They have no name. They are nobody. They are the murdered but unrecognized victims. In Poland thousands of family members of these victims live. And they live with this huge load of victimhood and injustice.

How do the families react to the initiatives to commemorate the murdered families of the Poles?

Above all, with tremendous relief. The older generation repeats that they are happy to be alive to finally see this symbolic justice served. The younger generation reacts differently. They have to confront a history that is unimaginable from their perspective.

Were any institutions inviting the families of the murdered Poles to recognize them for helping the Jews?

I have never heard about it. But for incidental cases, certainly not. There has not been a database of such families thus far. No institution has done comprehensive research on this subject. The Pilecki Institute is the first one. But the first most important step was made by Dr. Mateusz Szpytma, the creator of the Ulma Family Museum in Markowa.

But so much is said about saving Jews ...

Most often from a perspective that excludes this group. The measure of the significance of rescue is the percentage of rescued Jews in relation to the population, the degree of anti-Semitism, the attitude of the Church, etc. Even if one notices the fact that in Poland and Ukraine people were murdered for providing help, that is where the discussion ends. Whereas, the type of repressive measures employed by the occupying German forces is the most essential factor in dealing with this subject, in determining the possibility of providing assistance and its effectiveness. What characterizes the behavior of the Gestapo or gendarmerie in relations with the Polish people is extreme sadism. In the villages, the farmers were beaten with sticks till they were unconscious, sometimes by completely drunk gendarmerie. After the execution, their homes were robbed of their possession, furniture, food, and sometimes burned. In the cities during the interrogations by the Gestapo, pincers were used to pull nails. Before being murdered, the Poles helping the Jews were terribly abused and insulted. Those who murdered them, I'm sorry to use a strong word, were thugs in uniform. It was them who caused the situation where the Jews become the life bringing death.

So what is the purpose of commemorating this group of Poles?

Above all, we want to strenghten the families of these victims. They must not feel that their loved ones died in vain. We want them to be proud of the attitude of their parents and grandparents. We also want to clearly honor the values that guided them and integrate local communities around them. In the villages and small towns, these people were deeply religious and courageous. Nobody sentenced them to death. They risked their lives themselves voluntarily. They cannot be just mere ashes of history. The local communities integrate around them.

Before the Holy Mass, the parish priest from Poręba discreetly asked whether the orchestra could play the national anthem. So he understood everything, without words. By the way, the priest beautifully renovated the church, the historic presbytery, he has cleaned a nasty plaster from a stone wall around the church. He cares about the heritage and it shows.

But isn’t it such sad celebration?

Not necessarily. The Pilsudski Institute's employees tell the tragic story of these small communities and that story become their own, their memory. On the Day of Poles Saving Jews celebrated on March 24, each community goes to the place of their commemoration; fire station orchestras, Societies of Countryside Hostesses, teachers, neighbors, local administration, mayor, school children. The priest will say a mass. Because this is their own story. And no one ever will be able to take it away from them.