Putin's henchmen advise how to make Poland the main scapegoat 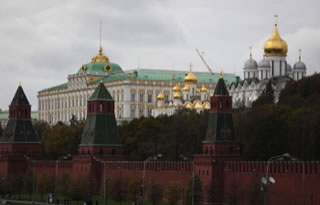 "The Sunday Times" reports that a month ago a group of scientists working for the Kremlin met. The goal of the meeting: developing a plan how to make Poland the "main scapegoat" in disputes about the past.

The conference was not secret and its record is available in the specialist magazine "Россия в глобальной политике" and on the website globalaffairs.ru. The conference is described in more detail on dziennik.pl.

"If we and European bureaucrats need a common enemy, Poland will be the best candidate." This is one of the theses that can be found in the transcript of a meeting of historians and sociologists advising Vladimir Putin.

The discussion was moderated by Fyodor Lukyanov, the head of the Foreign and Defense Policy Council directly reporting to the President of Russia. He emphasized how important role plays the memory of the past in current foreign policy. Then he informed the audience that they had met because: "The president (Putin - author's note) has made a clear statement on several occasions about revising the history of World War II, particularly paying attention to Poland's nasty role."

Lukyanov directly pointed out that Putin was very disturbed by the "September resolution of the European Parliament on the 80th anniversary of the outbreak of the war in which the USSR is officially called the culprit along with Germany." A member of the Public Council at the Russian Federal Agency for Nationalities, Dr. Alexei Miller, also took the floor. In his opinion, a great success of Poles was to promote the person of Captain Witold Pilecki, "whom they will now commemorate as the embodiment of the European approach."

According to Miller, Pilecki is "the perfect embodiment of a Pole - the victim of two totalitarianisms," and the perpetuation of the thesis that Soviet totalitarianism did not differ from Nazi in the Third Reich and that both regimes worked together. This would be a defeat of the Kremlin's historical policy.

In turn, a member of the Foreign and Defense Policy Council Dmitry Efremenko said that "Israel and world Jewry" should become Russia's main partner and ally in creating a historical narrative. Developing his thoughts, Miller emphasized that Russia must: "focus on distinguishing the ideology of Nazism from communism. At least there is no anti-Semitism in the latter." The main content of the message should concern: "the role of the Red Army in saving the part of European Jews that was not destroyed by the Nazis by spring 1945, but was certainly in mortal danger had World War II in Europe lasted a few more months." Other participants in the discussion supported these views without reservations.

Generally, the picture that emerges from the Russian historical narrative is that Poland was co-responsible for the outbreak of World War II and for the Holocaust. However, the Red Army defeated the Nazi Third Reich and rescued the Jews - notes dziennik.pl.