"It was beyond my Imagination"
Prof. Lech Kaczynski talks about Lech Walesa
Excerpts from 2000 Interview with Prof. Andrzej Nowak 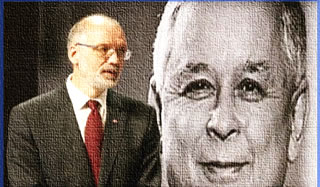 [...] You just mentioned the "great helmsman" - Lech Wałęsa. When did you become close to him? When did you decide that this was the man with whom you could...

In November 1982, after being released from internment. But I met him before, back in 1978, in the Free Trade Unions as (he was) a "trainee." At that time, he did not attract any particular attention; just one of many other workers attending these lectures. I taught them almost everything; politics, history, a bit of law - such a mixture. There was a group of 20-year-old boys from Białystok, from Łomża areas, boys from workers' hotels - with the intellectual capacity of good students; It was then clearly visible what kind of educational barriers there were in the People's Republic of Poland.

Everything interested them. They were also interested in the mechanisms of why something is happening this way and not the other way. Walesa, on the other hand, was most interested in the fight with the foreman – he viewed the opponent extremely low. Later, it was he who would become the leader.

It was only in the [Gdańsk] Shipyard in August 1980 that I switched to a less formal relationship with him. In the first “Solidarity,” I was, out of deep conviction, in the group opposing him because I thought that the policy of experts was extremely "roundtable," not very radical – and thus could not lead to anything. Later in 1981, I was slowly moving towards his side, but only with convictions, because the "organizational" transition was a problem from a moral and sociable standpoint.

In 1982, I was released from the internment camp several days before Wałęsa. I also went to say hi to everybody because in those circumstances the old disputes and disagreements faded away. It was then that Wałęsa offered me cooperation.

Was there at that time, in 1982 or earlier, any aura of doubt as to collaboration around Wałęsa... Has anyone talked about that?

I will tell you how it looked like at the meetings of the "Constellation" in the fall of 1981. For the benefit of the readers of "ARCANA," I would like to clarify that this is a group connected with Andrzej Gwiazda and regional activists close to him. [...] At these meetings it was [Andrzej] Kołodziej who spread the information that Wałęsa was an agent; [it was] sometime in October 1981. I treated it as part of youthful departure of a young man; please remember that Kołodziej was 21 years old at that time. As I related the "Constellation" meeting to my brother, I jokingly told him that there was a long discussion, whether Wałęsa was a corporal or a platoon member in the UB (Polish communist security service). Kołodziej, whom I've always liked, back then was seriously coming to me with the plan to dig an underground passage under the Office of the Council of Ministers... So this was the context in which I perceived his information about Wałęsa and I did not take it seriously. Kołodziej has recently returned to Gdańsk after many years, and I wish him the best, he is definitely an extraordinary man.

And when did you begin to have doubts [about Wałęsa]?

In the 1980s, I was in the milieu of Wałęsa as one of the WZZ [Free Trade Union] members. It took many years for me to become his close collaborator - not in a personal sense but only politically because for example Arkadiusz Rybicki was always closer to the Wałęsa's family – [it was] sometime in 1988.

Now and then we "talk honestly over a drink" and then I realized - from his own stories - that something had already happened. Back then I treated it as something that happened and had passed. Everybody has some weakness, and he was a provincial boy who came here and had already played a certain role in the December 1970 strikes. Already based on my experience in WZZ I knew that the SB treated the intelligentsia very differently than workers. I realized that he might have been the subject of a pressure completely different from mine: insults, beating, behavior that was generally not applied to intellectuals, and it was the order of the day with the workers. I thought there must have been something not good, but I thought that the fellow straightened even more, toughened up. I had no doubts as to his serious role, and to this day I do not have such doubts - I think that he played an important historical role.

This is the man to whom I have the most extreme possible reluctance, but that doesn't mean I deny his importance. I also realized that the boy who in November did not have long pants and walked in shorts herding cows, has different life experiences than I do. This cannot be compared.

I never ask, but what he himself told me indicated that there was something with the SB. It concerned the years from 1970–1972, maybe until 1973, from December 1970; Macierewicz says that up until 1976. Already in the eighties I saw that Wałęsa was treating the secret police as an element of the reality we live in, that he took it into account in his own calculations. I realized that he, for example, knew about some of the people who happen to be around him (and at that time there was not many people around him) that these were people from the secret services - and he tolerated it. Anyway, he once mentioned to me that it was better to know such things than not know about this or that guy. Today I look at it this way - that he made such arrangements a permanent feature of the game he was playing. Until today I do not believe that he was an "agent" in the second half of the seventies, but I do believe that in the 1980s he had some contact with the high levels of security authorities. The hypothesis is such that it was [Adam] Krzysztoporski, i.e. the boss of Security Services until the fall of 1981, and later, formally at least the deputy minister of maritime economy. Wałęsa, according to this hypothesis, had some information from them and treated them as one of the elements of his game. I would like to emphasize that this hypothesis with Krzysztoporski does not come from me nor from my brother.

When did this start to have any political significance for you?

On a larger scale, it was only towards the end of 1990. In the fall of that year, I already knew that military intelligence services are jumping all over Wałęsa, and that priest [Henryk] Jankowski acts as an intermediary. Later, when I became the Minister of National Security, this information was confirmed when I was shown photos of various high-ranking officers of military intelligence services at parties with priest Jankowski.

This was the time when your cooperation with Lech Wałęsa lasted for many years and was gaining political momentum. What did you want to achieve with Wałęsa at that time?

I will answer very clearly: together with Wałęsa we tried to implement a more decisively anti-communist policy. Faster changes in administration, getting rid of communists possibly from the banking system - I already understood how important that was. We wanted to gain Wałęsa's support for the creation of a political system.
[...]
When someone asks me if I thought it was possible that Wałęsa would betray us for the benefit those who later formed the Democratic Union, I laught. Of course everyone who collaborated with Wałęsa had to take this possibility into account. Contrarily, the possibility that he would betray us for the benefit of the communist security forces, that never occurred to me. I started to notice it only in the late fall of 1990. The return of Wachowski during the presidential campaign of Wałęsa was the first sign of it. As for him, I had no illusions where he comes from.
[...]
The fact that Wałęsa would build a power structure, the essence of which would become the [communist] secret service, did not cross my mind, I admit honestly - it was beyond my imagination...

Lech Kaczyński (born 1949) - dr hab. legal science; member of KOR, activist of WZZ Wybrzeże and "Solidarity"; in August 1980, advisor to the MKS in the Gdańsk Shipyard; interned after 13 December 1981; later activist of the TKK, RKK and KKW NSZZ "Solidarność"; during the communist era of the Polish People's Republic investigated by Department III of the KW MO in Gdańsk as part of the SOR crypts. "Radca" and the Inspectorate II WUSW in Gdańsk as part of the SOS / SOR crypt. "Kacper" (http://katalog.bip.ipn.gov.pl). In the years 1989–1991 Senator of the Republic of Poland; in 1990 vice-chairman KK NSZZ "Solidarność"; in 1992–1995 President of the Supreme Chamber of Control; in 2002-2005 President of Warsaw; in 2005-2010 President of the Republic of Poland; killed in the crash of the Polish Air Force One in Smolensk, Russia, on April 10, 2010;

Antoni Macierewicz (born 1948) - historian and scout; since the sixties, anti-communist activist; team leader of "Black One"; co-organizer of the Włóczęgi Group (senior scouts circle aiming at regaining independence); participant of March '68 and co-founder of KOR; activist of NSZZ "Solidarność" and the Clubs of the Independence Service; journalist and editor of "Głos:" imprisoned and persecuted in the Communist Poland; operationally worked out by the SB as part of the "Director" cases, "Players," "League" and a crypto inventory questionnaire "Macek" (http://katalog.bip.ipn.gov.pl). In the years 1991–1992 Minister of Internal Affairs; in the nineties under surveillance of the so-called Team of Col. Jan Lesiak; in 2006 and 2007 Deputy Minister of National Defense (responsible for liquidation of communist Military Intelligence Service “WSI”); in 2006–2007, the head of the Military Counterintelligence Service; since 2010 the lead investigator of the crash of the Polish Air Force in Smolensk, Russia, on April 10, 2010; between 2015-2018 Minister of National Defense; since 2019, Senior Marshal of the Sejm.


Arkadiusz Rybicki (born 1953) - historian; anti-communist activist; member of ROPCiO and RMP; participant in the strike at the Gdańsk Shipyard in August 1980; after 13 December 1981 interned in Strzebielinek; in the 1980s, a close associate of L. Wałęsa, incl. co-author of the book “The Road to Freedom. The Decisive Years 1985–1990,” Warsaw 1991; in 1990–1991 an employee of the Chancellery of the President of the Republic of Poland; in the years 1976–1989 investigated by the SB Gdańsk (Department III and Inspectorate II) as part of the SOR crypts. "Dominik", "Aram" and "Jason" (including http://katalog.bip.ipn.gov.pl).