How Germans and Soviets conspired in committing genocide on ethnic Poles 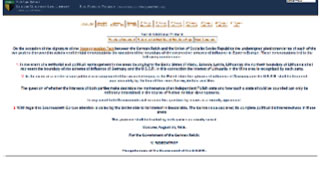 To all the demagogues and creators of the "new history of Europe" who, with the increasing fervor have been denying the role of the Soviet Union in the extermination of the Polish nation, it is worth recalling the mutual Soviet-German meetings in the years 1939-1941 in the occupied Polish territory.

The Ribbentrop-Molotov Pact signed in August 1939 between Nazi Germany and the Soviet Union, was not, as is explained by Russia today, the result of an inevitable historical process; innocent agreement, sanctioning only war events, unleashed exclusively by Hitler. On the contrary, the Molotov-Ribbentrop pact was a prelude to the genocide that the two powers had pledged to inflict together on the Polish nation. This is confirmed by all subsequent international agreements that the USSR signed with the German Third Reich, as well as the entire history of mutual relations between these two countries in the years 1939-1941.

Friendship over a new border

As early as September 28, 1939, both aggressors signed the Treaty on Borders and Friendship with secret annexes, in which they sanctioned the "downfall of the former Polish state" and confirmed the actual IV partition of Poland. Among the treaty documents was an infamous map with a hand-written line, running through the center of the occupied Poland, that indicated the new border between German-Soviet dictatorships and Stalin's own signatures. The secret protocol attached to the September Border and Friendship Treaty between the USSR and Germany proclaimed: "Both sides will not tolerate in their territories any Polish opposition that concerns the territories of the other party. They shall suppress in their territories all origins of such activities and inform each other of appropriate measures (undertaken) for this purpose." This short text is of great importance because it determined the fate of the Polish people under the Soviet German occupation. In essence, it is a verdict against Poles and it has become the basis for mutual cooperation of the apparatus of terror of both occupants in exterminating Polish nationals. In implementing this genocide, both regimes acted as a teamwork.

This criminal cooperation was implemented through, inter alia, four meetings of NKVD and  Gestapo, which took place on the occupied Polish territory. Already on September 23, that is even before signing of the Border and Friendship Treaty, the Soviet and German armies organized a triumphal joint victory parade over the defeated Poland in Brest-on-the-Bug. Four days later, in the same city, the first Gestapo and NKVD conference took place, during which the two miscreants conspired with each other against the Polish independence movement. They jointly planned methods of preventing and suppressing the Polish resistance. Less than two months later, the leadership of the NKVD and Gestapo met in Przemyśl, where the issue of treatment of Polish prisoners-of-war and common methods of exterminating the Polish nationals was discussed. Soon, both sides again recognized the need for a meeting. Their third meeting took place on February 20, 1940 in Zakopane.

During this III Methodical Conference of the NKVD and Gestapo, organized in splendid villas "Pan Tadeusz" and "Telimena," they devised a detailed plan for extermination of the Polish people. The goal was to synchronize their activities to be more effective in eradicating ethnic Poles. The meetings between Gestapo and NKVD continued until April 1940! According to the researchers, it was then that the mass genocide of ethnic Poles began to be implemented.

From the German side, the plan was implemented through a mass pacification action code-named Action AB and the so-called Intelligenzaktion, which started earlier in a number of regions of Poland such as Sonderaktion Krakau, and claimed the lives of several thousand representatives of the Polish intelligentsia; from the Soviet side – the operation known as the Katyn Massacre included a mass murder of all Polish officers held by the Soviet Union as prisoners-of-war and also carriers of Polish identity arrested by the Soviets on the conquered Polish territory and subsequently murdered in Bykovnia, Kuropaty and other still unknown locations throughout the Soviet Union.

The gruesome aftermath of the III Gestapo - NKVD Conference was the plan assuming the final liquidation of the Polish nation by the year 1975. The tool for effective implementation of this murderous and genocidal strategy was in the first place the extermination of Polish elites as the most state-formative factors, next the use of remaining Poles as a slave labor force. This strategy of slave labor force was a specialty of Stalin, a method already well tested on the majority of other nations of the USSR – the infamous deportations. As a result of this devilish strategy, only 5 percent of the Polish population was to ultimately remain on the Polish lands incorporated to the Soviet Union. The remaining part, which would have escaped murder or extermination in slave labor, was to be dispersed throughout the distant Asian territories of the USSR, where it would not constitute a concentrated ethnic group capable of self-organization to establish the Polish state. This Stalinist deportation and extermination plan was surprisingly consistent with Hitler’s dreams laid out in "Mein Kampf," the establishment of a "living space" for the "race of lords" and growing of Third Reich on the territories of the Second Polish Republic to the east of historic German territory.

Not everything is known

Interestingly, Nazi Germany, posing in the 1930s as the main opponent of Communism and even trying to attract Poland to the AntiComintern Pact, suddenly in just two months of 1939, developed a strong affection for communist ideology. This friendship with communists manifested itself by giving approval for communist organizations to conduct activities in the so-called General Government, i.e. in the Polish territory occupied by the Third Reich that was not incorporated directly to the Third Reich. Such creations as "Sickle and Hammer," Association of Friends of the USSR or "Proletariusz," attracting left-wing activists, were silently supported by the German Nazi authorities of the General Government because of their anti-Polish stand. They operated under the guise of Polish underground resistance in order to destroy the real Polish underground.

Although the Germans and Russians were free to carry out their criminal anti-Polish activities in the occupied territories of the Republic of Poland, nevertheless they tried to hide them and kept them in strictest confidence. But some elements of this devilish operation did not escape the attention of the intelligence services of Western countries. Materials on cooperation between Gestapo and NKVD against ethnic Poles were collected, among others by British military intelligence. Unfortunately, Prime Minister Margaret Thatcher classified them as top secret until the year 2024! It is important to point out that the decisions made at the 3rd NKVD and Gestapo Conference were formally ratified by the Soviet Politburo of the CCC Central Committee (b) and by Stalin on March 5, 1940. This ratification gave the criminals a "legal" cover to commit the crime of genocide in Katyn and many other locations throughout the Soviet Union.

It is a grave historical mistake that the materials from the grim and infamous cooperation of NKVD with Gestapo in committing genocide on ethnic Poles have not been made public to this day. This crime of conspiracy in committing genocide on ethnic Poles was not mentioned or recalled at a  recent conference in Moscow, where specialists in "history" written by the Russian intelligence services sold their "revelations" about the alleged cooperation of the Second Polish Republic with Nazi Germany to the entire world.