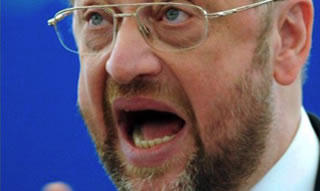 Hundreds of billions of dollars are at stake and the shape of the entire European Union.

The issue is that huge amounts of money from Poland stabilize other countries if they would have control over the technologies implemented in Poland, and that Poland would not stop the federalization of Europe.

The decision of the European Commission to "monitor" the rule of law in Poland represents a policy of pressure and the continuation of the strategy of intimidation and blackmail. It does not have much practical significance, but it has to impress the public opinion in Poland and beyond. It also has to trigger the "re-socialization" of new Polish government. The European Commission is ultimately just a mailman of that, which was born outside Brussels. It was cooked in various interests groups, in the lobby circles and in some capitals, which, through the media, are trying to train the new Polish government and influence its decisions. There are many excuses, but the case of the Constitutional Court became very comfortable. Multiple objectives of this rehabilitation of Poland undertaken from the outside could be listed, but the most important are the economic and political ones.

Poland in the coming years will spend approximately one trillion zlotys to modernize the state of the economy, this includes funds from the European Union. Poland will modernize her Armed Forces for about $100 billion. The PiS government will have a final say on how these funds are going to be spent. Until now, most of the money spent on modernization of the Polish industry and army, which is hundreds of billions of zlotys was making its way directly or indirectly to various countries that now want to reclaim the Polish government. And the "Polish" money to a large extent determined the condition of the companies, their support for governments that contracted with such lobbying and support. These "Polish" moneys created jobs in other countries and thus solved some of the problems of their societies. The money was an important factor of political stability in those countries. Contracts with Poland also allowed to influence the Polish economy and the military sector, leading to dependence on specific technologies.

The PiS government's announcements leave no doubt that many of the current beneficiaries of such money would lose contracts, and even if this does not happen, their impact on Poland will be significantly reduced. This means not only measurable loss, but also the disappearance of important opportunities and tools of influence, what is right now happening in Poland. The PiS government is a clear threat to the interests of many important players, including the essential interests of some countries, transnational corporations and groups, and the impact of various lobbies and international institutions, including financial ones. It's not just about contracts, but also about the policy towards the banking sector, with tax changes eliminating obvious windfall benefits of foreign entities. It is also about stopping the transfer of at least $20 billion a year abroad by entities that report in Poland only losses, and yet do not stop operations, but carry out further investments. It's all about such influence on the Polish government to maintain the status quo and not to lose the exorbitant amount of money earned in Poland. We are therefore faced with very concrete and tangible interests that determine the strength and scale of the pressure on Poland, as well as the determination to reshape Poland or rather milk her.

In a political sense extending "control" over Poland means in fact to keep her in check and within this assigned status. Poland is the largest and strongest state admitted to the EU in recent years and the most important and the strongest post-communist state in the EU. And it is perceived by the governments of the so-called “Old union” and by the euro-bureaucracy as a polite state, submissive, subordinate to the stronger ones, and willing to respect their interests. The Hungary of Viktor Orban was indeed a serious problem for many countries and the EU's bureaucrats, but it had only ten million people, and Budapest had no chance to play a leadership role in the region. Poland snapping up like Hungary from federalization plans limiting the role of governments and national parliaments is a far greater trouble. And her example would be much more contagious. Thus the pressure on the new Polish government or even blackmailing must ensure that Poland won’t pose any challenge to those powerful interests in Brussels who shape Europe according to their own interests and tastes.

Poland is not a member of the euro-zone, so Brussels cannot influence Poles through this currency and through the operation of the European Central Bank. Nor can the costs of rescuing badly performing euro zone countries be shifted to Poland. And Poland is also the largest potential and real ally of Great Britain, which wants many changes in the EU. Polish backing of the British proposals would be a big problem for Germany, France, Italy and Spain. The former Governments of Donald Tusk and Ewa Kopacz were “well-behaved and polite”, not resisting, because Tusk had a personal interest, and eventually got a job as President of the European Council; while Ewa Kopacz had no ambitions to take an independent policy course. The government of Beata Szydlo does not want to be a good EU boy for milking and she won’t pursue the interests of Berlin, Paris, Rome or, more broadly Brussels if they are not compatible with those of her native Poland. And this is the obvious and understandable reason to soften Poland as much as possible, including by methods of pressure and blackmail. The Polish government shall be submissive and remain in the same place, which was assigned to it when Donald Tusk and Ewa Kopacz represented Poland at the meetings of the European Council.

One may wonder what excuse would have been found in Brussels, had there not been changes in the Constitutional Court or if the public media were not touched. For sure some would have been found. In all this, the point is not about democracy, which in Poland is not threatened, but of big business, big money, and the future shape of the EU. And these are the real reasons for the attempts of taking "control" of Poland and an obvious blackmail of the government in Warsaw. The rest is inconsequential didaskalias or noise, which covers up the real objectives of such resocialization actions against the Polish government led by the Law and Justice.