International Election Observers’ report reveals numerous irregularities during the first round of the Polish Presidential Elections. 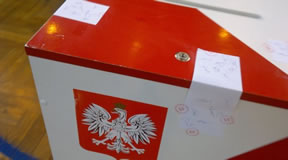 An independent report reveals that staff at the polling station mixed up candidates’ ballots, which were then counted as votes for the incumbent candidate Bronisław Komorowski’s. The foregoing is only one of many allegations in the report prepared by a 60-person group of foreign journalists who observed the 2015 Polish presidential elections.

Following is a full report prepared by the Election Observers after the first round of presidential election in Poland.

General attitude towards the international observers

Despite having the prerequisite credentials to enter any polling station in Warsaw, the observers were not allowed into the station on Śląska Street, in Włochy District. Some staff did not know why the international observers were not present, but ignored their absence and proceeded anyhow.

International observers were prohibited from taking photos and were requested to delete the photos they took earlier.

The staff at this polling station was clearly untrained, unaware of the legal procedures, and unable to handle the ballot duties. As a result, the staff had to rely on local authorities’ to be instructed about the details on voting procedures and existing legal requirements.

Storage of the ballot forms during the pre-election night

The method of storing ballot forms at some polling stations during the Saturday night, before Sunday election, did not comply with the existing laws and regulations. At many stations the ballot papers were not secured in safes, rather, they were kept in unlocked cupboards or cardboard boxes instead. The doors to the rooms were not secured and voting stamps were neither sealed nor were their thereabouts verified by the polling station staff.

At some polling stations the ballot papers were simply kept on the tables in unlocked rooms.

A ballot count at the Czestochowa Polling Station No. 90 revealed, that their number is down by 10, in comparison with the pre-election night count.

Insufficient number of the Electoral Commission’s staff during the voting

Only one Electoral Commission member was present during the 10-hour voting period at the polling station number 5 in Błaszki, whereas in order to comply with the electoral laws and regulations, there should have been at least 3 members of the staff present; including the presiding officer and his/her deputy. At the polling station number 8 in Błaszki, the local elections’ manager got drunk and fell asleep during the voting. After he was awoken, he left the station in his car. It was observed that upon his return some time later, he was even more drunk. The Police was not called in to investigate. A female manager at a polling station number 7 was also reported to be under the influence of alcohol.

There were two entrances into the polling station number 90 in Częstochowa, which confused the voters. Information about voting procedures available at one of the entrances was found not to be sufficiently clear, resulting in 10 invalid votes. At another polling station observers noticed the absence of clear instructions on how to vote in the booths.

Entire families were allowed to enter the voting booths together in groups, despite the fact that voting booths were intended for individual voters, and offered curtains to protect the privacy and secrecy of voting.

Inappropriate handling of the ballot boxes

At one of the schools in Kazuń Polski the ballot box was not secured and/or sealed until 11.00 a.m., despite the fact that the polling station was opened from 7 a.m.; this resulted in the ballot papers lying unsecured in a box throughout this time. The ballot box was sealed and stamped only after the Citizen’s Oversight NGO organization, and one of the international observers, alerted the staff. Similar incident took place at the polling station number 90 in Częstochowa, where the ballot box also remained unsecured until 7.22 a.m. Subsequent vote count at this station revealed an unexplained appearance of extra 32 ballot papers which were never handed out to the voters.

Unsecured ballot boxes after the election

Some of the polling stations failed to stamp ballot boxes after the voting ended.

The presence of ink pens during the vote-count

To comply with the voting laws and regulations, no ink pens should have been present during the vote-count to prevent potential manipulation of the ballot papers. Any and all notes should have been made by pencil only. For example, after discovering a shortage of pencils at the polling station number 573, the staff used ink pens instead.

During a vote-count at yet another polling station, the staff mixed up the ballot papers of all candidates in such a way, that the votes were counted as those given for the incumbent president, Bronisław Komorowski.

The handling of invalid ballot papers and electoral registers

At the polling station number 8 in Konstantynów:

- The electoral register was not secured.
- The polling station staff did not stamp the signature register.
- The staff did not mark the voters’ register with the letter “Z” to prevent from adding more voters to the list.

- The rows of individual voters’ names were separated by gaps, which potentially enabled insertion of more names into those gaps.

In Kazuń Polski, the ballot papers were not stamped at the end of the voting, indicating that they were not secured.

An original protocol with hand-written signatures went missing, before the electronic version was produced at the polling station in Błaszki.

Before voting results were keyed into the computer system at the polling station number 659 in Warsaw, there was no handwritten and signed protocol present. It means that the electronic report of the results was in place before the final, handwritten protocol was produced. This incident was reported by Ukrainian journalists.

The computer system at the polling station in Częstochowa District crashed for half an hour.

In the Warsaw’s borough of Wola, a member of the polling station refused to hand over a copy of the final vote protocol to the NGO citizens oversight organization; despite the fact that it was required by the Polish National Electoral Commission. The law requires that upon request such copies should be produced if requested by an NGO citizens’ oversight organization.

Publishing of the protocols at polling stations

At the polling station in the school in Janówek Pierwszy, the final protocol was displayed in one of the windows. However, the area around the building was fenced off, preventing the public from viewing the final results.